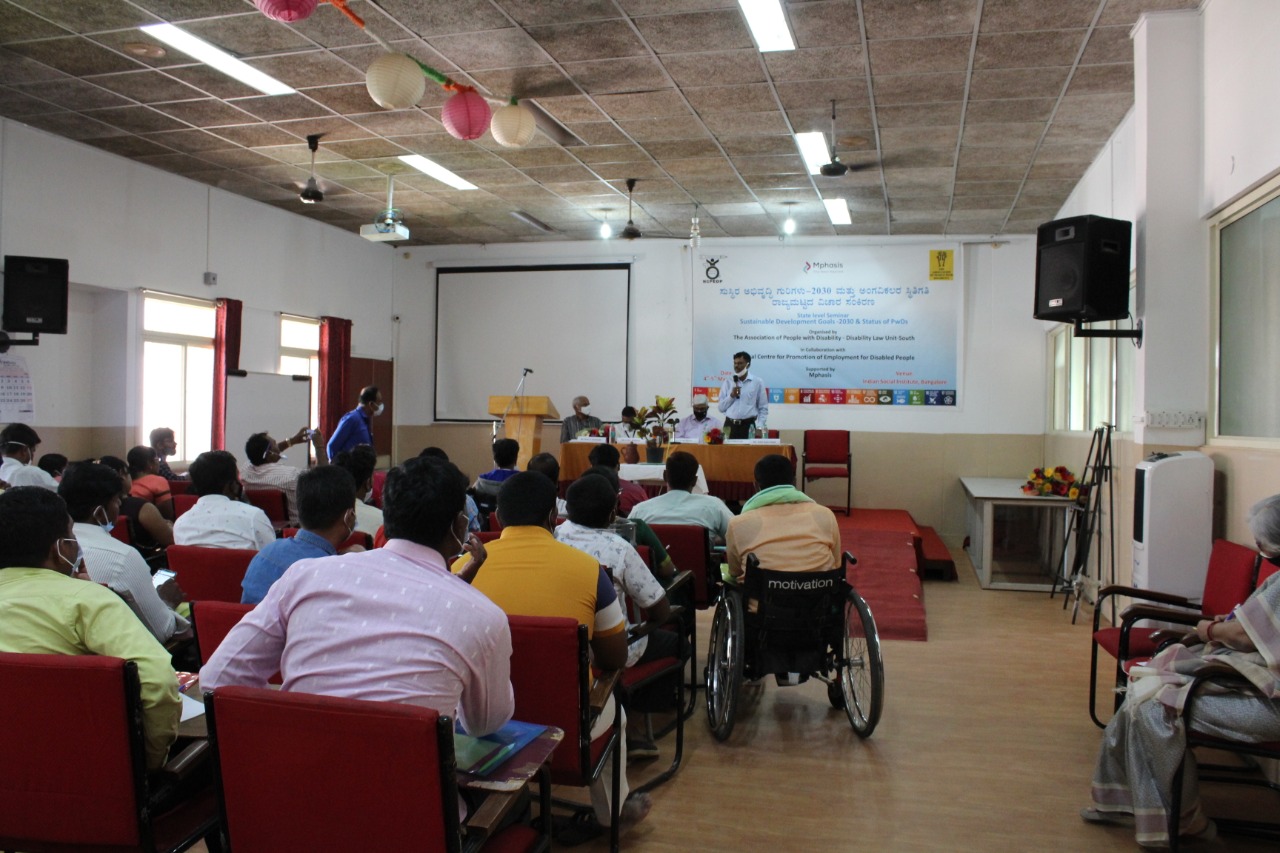 The Association of People with Disability (APD) - Disability Law Unit (South) and The National Centre for Promotion of Employment for Disabled People (NCPEDP) organised the Karnataka State level Conference on Sustainable Development Goals 2030 at Indian Social Institution, Bengaluru on 4th and 5th April 2021.

The conference got together 52 people including persons with disabilities (PwD), District Programme Officers (DPOs), parents, and caregivers of PwD from various districts of Karnataka.

Karnataka has been ranked sixth in the country in the Sustainable Development Goals (SDG) index.   However, it has scored low in achieving better results with regards to the goals of poverty alleviation, zero hunger, gender equality and sustainable cities and communities.

Though Karnataka’s achievement is 52 in terms of overall performance, regional disparity across the state is so high that many of the northern Karnataka districts’ performance is extremely poor and at par with BIMARU states.

*The MPI is calculated based on indicators of education, health and living standards.

Mr S Babu Khan, Regional Coordinator, Disability Law Unit, South and Asst. Director, APD welcomed the participants to the two-day workshop. He shared that while the state government is pro-active towards the inclusion of PwD, much still needs to be done with regards to ensuring ‘No one is left behind.' 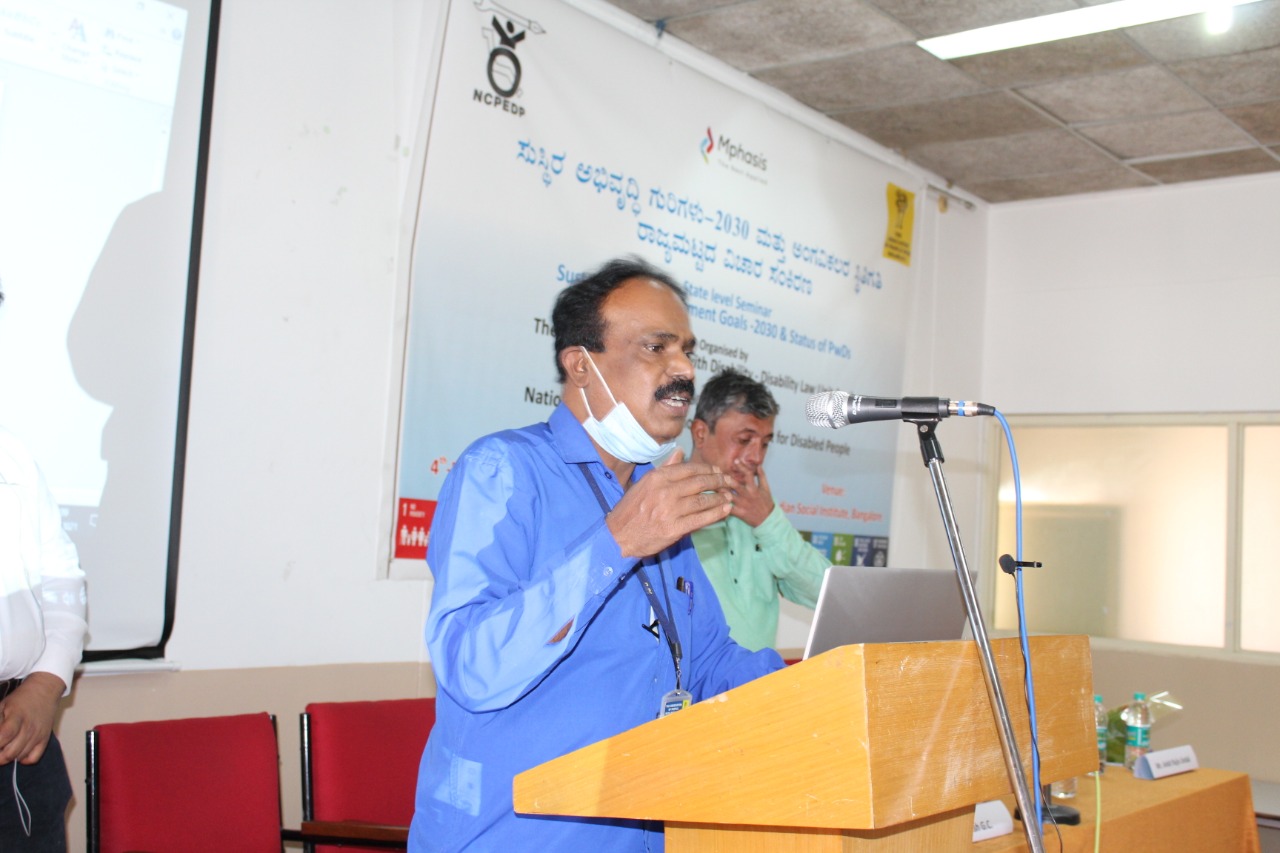 Dr Muniraju, Director, Directorate of Welfare of Disabled and Senior Citizen, gave a brief on disability inclusion in the SDGs. He stressed the importance of data for persons with disabilities and how data is helpful in framing policies. 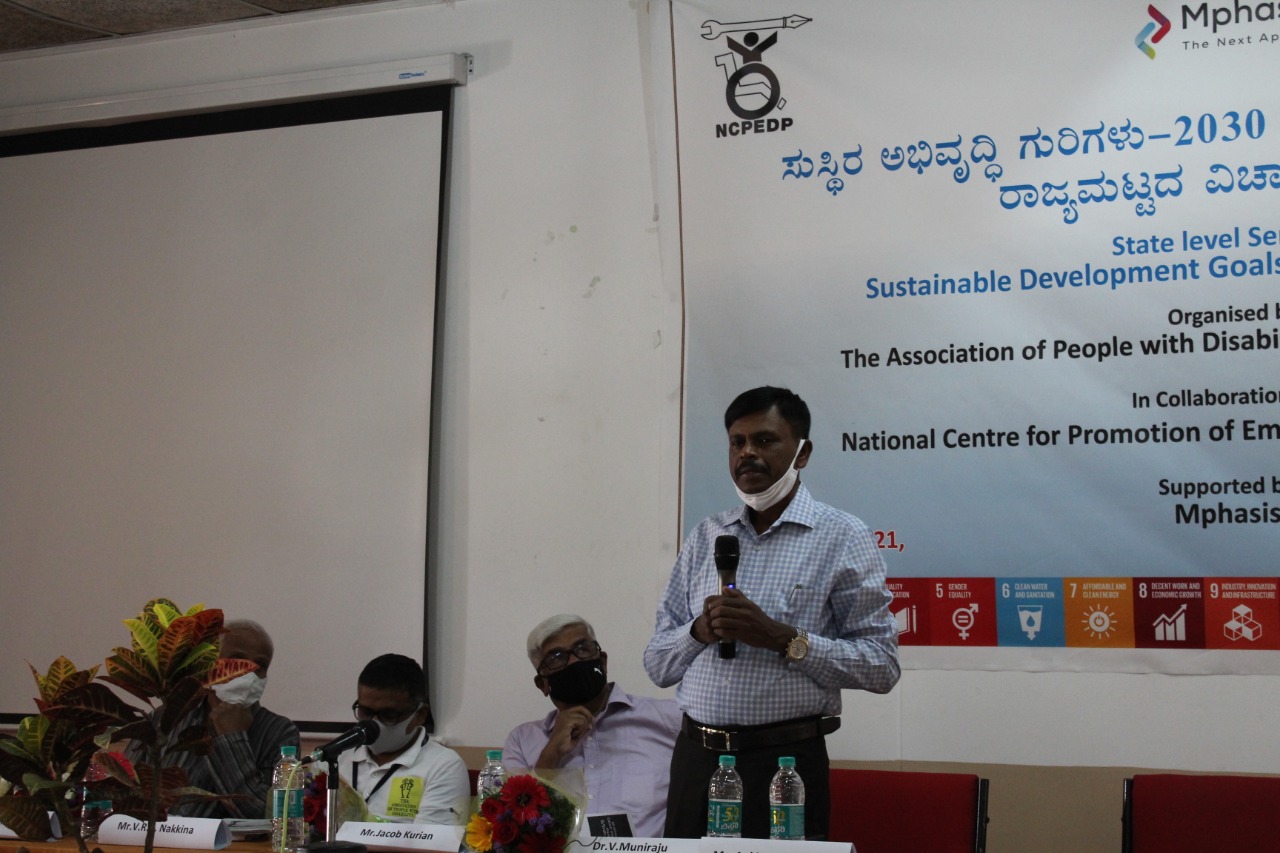 Mr Jacob Kurian, Honorable Secretary, APD stressed the importance of creating a rights-based approach towards disability and expressed that both government and Civil Society has to work in consonance to ensure the inclusion of persons with disabilities.

Mr Ankit Rajiv Jindal, Founder, Friends for Inclusion, opened the session by emphasizing the importance of data availability and specifically disaggregated data for PwD. The government and Niti Aayog's lack of data has a direct bearing on the policies, schemes, and programs formulated for PwD. 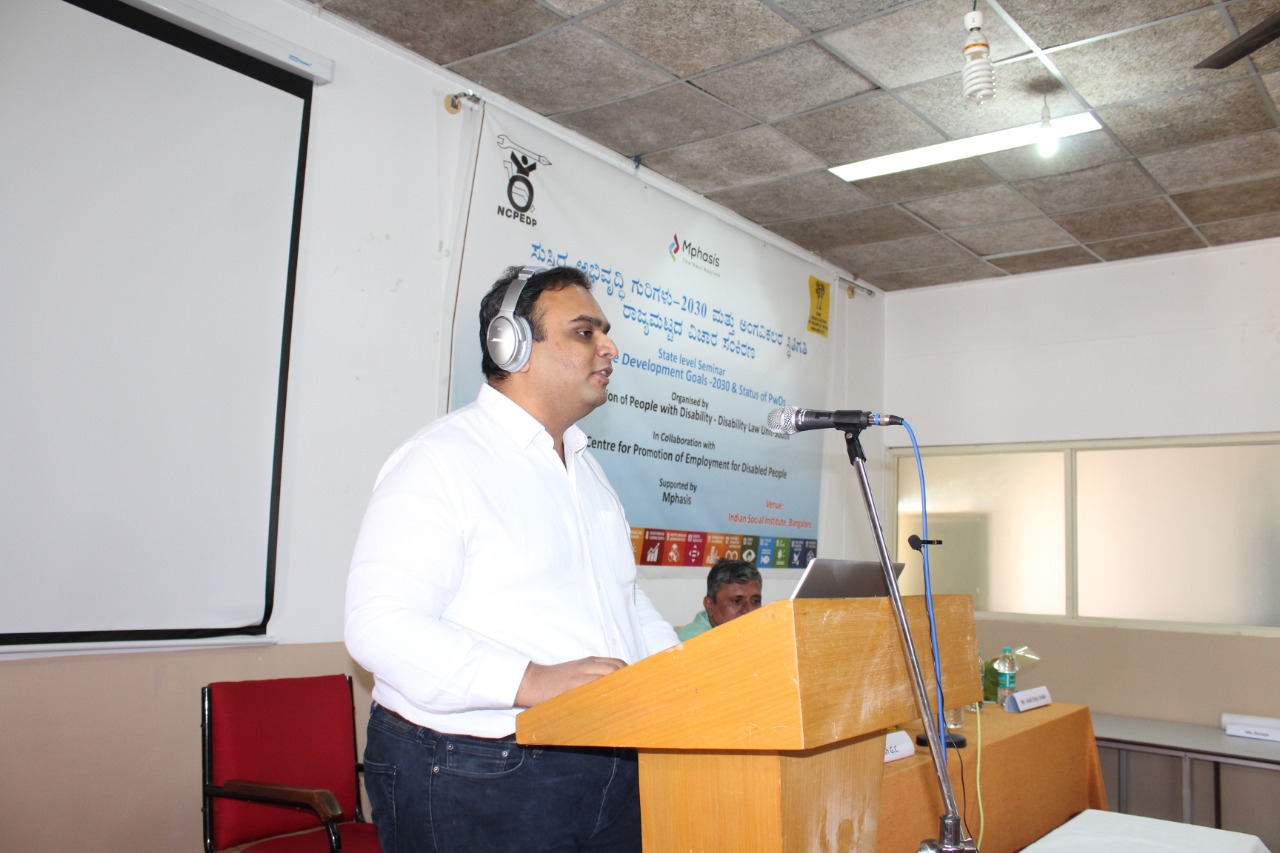 He explained the formation and adoption of the SDGs as well as the objective which was to produce a set of universal goals that meet the urgent environmental, political and economic challenges facing our world. With regards to the status of SDGs in India, it was adopted in 2016 and it has been more than 5 years now and very little can be seen in terms of disability inclusion.

Mr Babu S Khan, APD, briefed about the status of PwD in Karnataka vis-à-vis SDGs. A detailed report was presented highlighting the gaps where PwD have been excluded.

Session 4: Children with disabilities and SDGs

Mr N V Vasudeva Sharma, Executive Director, Child Rights Trust, talked about the issues and gaps with regards to children with disabilities (CwD) vis-à-vis SDGs. He shared that malnutrition of mothers is one of the leading causes of disability among children. CwD are cross-cutting across the 17 goals and 169 targets of SDGs but they have been largely left behind. For instance, looking at the first four SDGs, he explained:

The session was continued by Ms Usha, Consultant for Light for the World and Biswagouri Trust. She talked about the targets related to SDG 4 and shared that 100% enrollment of CwD in schools is not possible as we are already in 2021.

She also spoke about inclusion and expressed that it is about creating a secure, accepting, collaborating and stimulating school in which everyone is valued. She concluded by emphasising ‘Nothing about us, without us’ and urged the participants to keep questioning the government about the implementation of the SDGs.

Ms Varada Hegde, Seva in Action gave a presentation on the livelihood of youth with disabilities and sustainable development goals. She expressed that PwD should not be discriminated against on the grounds of gender and the rural/urban divide.

She shared about the various livelihood opportunities available in rural areas and urban in public and private sectors for PwD especially for persons with intellectual disabilities, and the self-employment opportunities.

A discussion was conducted by Dhwani Foundation and State Commissioners of Disabilities – 2020 on the outcomes of 5% Budgetary Reservation for PwD.

The main objectives of the study in Koppal and Davanagere were:

Status of Koppal district with regards to 5% Budgetary Allocation

Twenty-one departments have used 0.52% of funds to benefit 3138 persons with disabilities.

Cooperative Department has utilized the highest amount at 3.68% which gave a subsidy towards share capital to become members in various cooperative societies.

The next highest amount (2.38%) has been used by the Backward Communities Welfare Department for the purpose of pre and post-matric hostel facilities and seats for tailoring classes.

More than 50% of them have utilized less than 1% of funds.

Staus of Davanagere district with regards to 5% Budgetary Allocation

The next highest utilization was by the Department of Youth Empowerment and Sports (4.01%) for meeting travel costs and daily expenses of persons with disabilities to attend sports and rallies.

Though there is a lot of funds kept aside for people with disabilities developmental programs in the Line departments under 5% Resource Allocation have not utilized the funds.

Mr Manjunath Hoskera from the State RPD Task Force thanked the audience for their participation and urged everyone to use the RPwD Act, 2016 and exercise their rights.

Mr Nagappa also emphasized developing a rights-based approach and working towards ensuring the implementation of the RPwD Act, 2016. Lastly, he urged the participants to advocate with the concerned departments for the inclusion of persons with disabilities.

There's a long road ahead. Only if multiple agencies and people work together can we truly address the deeply-rooted issues and apathy that exists still for people with disability.