Is It Right To Call Disability An Affliction? 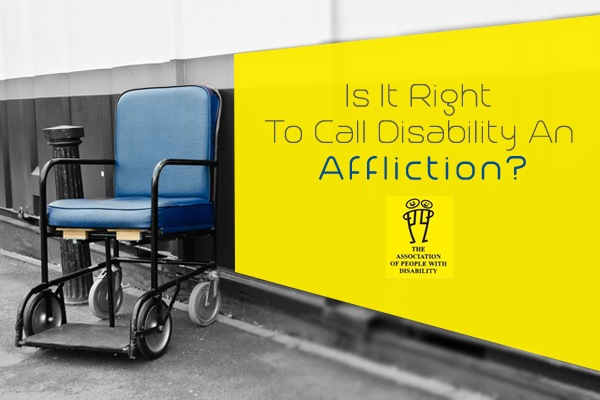 Is It Right To Call Disability An Affliction?

The words disabled and afflicted are often used in tandem despite the word being considered offensive. The plainest definition of the word afflicted is being limited in one or more ways to function normally, which holds true for many people with disabilities. But why is the word considered undesirable? The answer lies in its origins.

Where does 'afflicted' come from?

The literal definition of the word in common dictionaries today means 'to cause suffering or pain'. Its Latin root word 'afflictus' means being struck or cast down. The reason why this word is so deeply associated with disability is because it is often viewed as painful and troubling. In the Old Testament, this word was often associated with sin or stigma cast upon those who transgressed the laws of the religion. Disability was therefore, by extension, a type of stigma or curse. It was even a common practice to punish people who were perceived as 'sinners' and disabled people were considered to be the embodiment of this punishment.

The perception that people with disability are always in pain suffering is simply wrong. A person need not be deemed afflicted simply because they have Down Syndrome or Autism as many scientific studies suggest that they are not in any kind of pain. Disability is simply an additional challenge one has to live with.

From the language perspective

The word carries a lot of interpretive weight in terms of how a person views or understands disability. The negativity that surrounds the term exists not because it was based on the actual living experiences of people with disability but the imaginary experienced of the non-disabled i.e. people who perceive bodily wholeness as normal. The idea of normal is different for people with disability as it is for non-disabled. Disability has also been widely associated with fear of losing or the fear of being incapable of walking, talking etc.

When you think about it, the lack of walking ability is only considered bad because it remains a constant insecurity and irrational fear in non-disabled people. Those who were born without these abilities have never known otherwise and do not feel like they are incomplete or incapable. Oftentimes the real affliction isn't the disability at all; it is that people with beautiful minds that are often pushed aside in an ableist and often irrational culture.

In today's world, being politically correct is given more importance than honesty. You may sometimes wonder if the offense taken to the word afflicted is simply another act of keyboard activism. While the word itself isn't offensive, it is inaccurate in describing people with disability. Most people diagnosed with physical, mental or psychological conditions today are independent, capable and self sufficient thanks to technology and a good support system. Would you call someone like this 'afflicted'? Probably not.

So while the term afflicted isn't exactly hateful, it is surely not the right definition for the lifestyle of a person with disability. Remember, they are just differently abled and unique in their own right. Don't reduce their existence to a state of suffering.